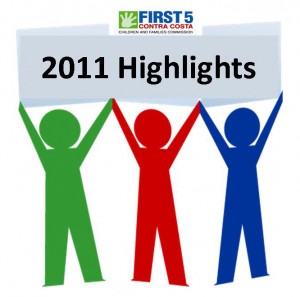 2011 was another interesting and productive year at First 5 Contra Costa. We spent much of the year responding to the State’s attempt to divert $1 billion in First 5 funding, which forced us to make major program cuts for the first time.  Just two weeks ago, the Fresno Superior Court sided with First 5 and declared the State’s raid on First 5 funds “invalid.” We’ll know by February if the State decides to appeal.

Despite the political and economic pressures of last year, the tireless work of First 5 Contra Costa and our funded partners carried on.

At our last Commission meeting, First 5 Contra Costa Executive Director Sean Casey presented some of the top highlights from 2011. Although this list does not include all of the outcomes achieved on behalf of young children and families in the last year, it’s a pretty impressive summary of some notable accomplishments:

2. We designed one of the most in-depth professional development programs for early childhood educators in the state. Our model offers more comprehensive individual instruction and assists entire child care sites, which will have a greater impact on children’s learning.

3. With our partners, we trained 150 providers from 50 agencies to implement the Ages and Stages Questionnaire, a developmental screening tool proven to help identify problems in children at an early age.

5. The Raising a Reader program expanded to 120 different sites, including all state preschools in the West Contra Costa and Pittsburg school districts.

6. 150 low-income parent volunteers received leadership development training and have become strong health advocates in their communities particularly in the fight against childhood obesity.

7. Nearly 1,600 families attended one of our five First 5 Centers. One in four families received help from a Community Resource Specialist, positions created to address the growing needs of families struggling from the recession.

8. More homeless families with children 0 to 5 sought shelter services and most located stable housing. Nearly half of these families began the process of regaining custody of their children while in residence at a homeless shelter.