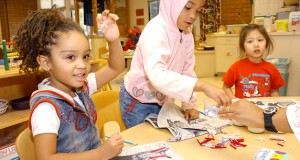 There are some good things in the Revise. Gov. Brown’s focus on the inequitable funding for school districts with high concentrations of disadvantaged students is admirable. But unfortunately, without access to high-quality early education, the research shows that many of these kids will start school already behind.

And let’s face it: the biggest threat facing California’s children is poverty. One in four California children lives in poverty. Addressing the inequities in education, and restoring high-quality child care are important steps, but lifting children and families out of poverty is by far the biggest game-changer for California. On this, the Governor’s budget is silent.

I was a little more heartened when reviewing the Blueprint for a Responsible Budget, the Assembly Democrats’ plan for achieving fiscal responsibility, strengthening the middle class, and delivering more efficient services for Californians. Hopefully it will be used to leverage a better deal for children from the Governor.

The Blueprint calls for providing greater access to quality early education programs and preschool for children in working poor families in order to avoid the “start behind-stay behind challenge faced by too many students today.”

It also tackles the issue of childhood poverty, even citing research about the effects of poverty on children’s brain development and future success in school. To build the middle class, it said, it is critical to tackle child poverty and make sure more poor children succeed in school and life.

After being in the First 5 business for almost 15 years, I am beginning to sense that legislators are finally talking our talk. Coupled with President Obama’s call for universal preschool, it is an exciting time to be in early childhood education and development.  These policies are wise economic growth strategies based on proven investments in our youngest children.

As Assembly Speaker Perez said, “We need to make an investment for the long-term. We need to pay down the state’s debt and build a Rainy Day fund, as the Governor has said. But we need to invest in kids, too.”