The new Antioch First 5 Center is opening next week! Drop-in classes start March 19 and run for two weeks. Come by and check out the new site.

Soon after, the Center will be open full-time six days a week, and offer classes on Saturday as well.

The new Center is located at 300 H Street in downtown Antioch around the corner from the former location.

Members of the West County Regional Group and the City of San Pablo just celebrated the completion of a major renovation project at Davis Park, a park that was plagued by crime, graffiti, and unsafe conditions until they joined forces with the City of San Pablo to improve it. This is the eighth neglected park First 5 Contra Costa’s Community Engagement Program has renovated in the last three years!

Davis Park was among the lowest rated when the WCRG evaluated every park in San Pablo for safety issues, old bathrooms, and lacking amenities like picnic tables and functional water fountains. After the parents presented their findings and recommendations to the San Pablo City, council members allocated $550,000 from the city budget for improvements.

To deter crime, the Regional Group members have sponsored park clean-ups and community meetings with police. First 5 Contra Costa will also be sponsoring free sports classes and other children’s activities to increase park use and children’s access to physical activity programs.  More than half of San Pablo’s children struggle with obesity – the highest rate of childhood obesity in Contra Costa County.

Davis Park is located at 1661 Folsom Avenue in San Pablo. Learn more about the Regional Groups.

Toddler Takes Big Steps Thanks to Help Me Grow

She consulted her pediatrician who told her to “wait and see”. Constance found this advice unsatisfactory, and the couple went to the West County First 5 Center to get developmental screening for Lars instead.

Lars received a screening on the spot, and it verified his gross motor development was behind. Three days later, Lars started attending a Help Me Grow developmental playgroup, a class First 5 Contra Costa created for young children who have moderate delays in their development. 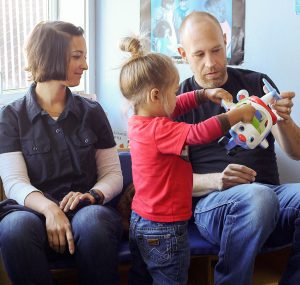 After the first class, the occupational therapist told Constance that Lars was having issues with his balance, and as a result, his muscles were underdeveloped in one leg. She gave Constance and Jubel exercises to do with Lars at home. After two classes, Lars was walking a few steps holding the therapists’ hands. He had never done that before. Four weeks later, as they were opening Christmas presents with family, Constance told Lars to “Come to Mama.” He did.

“He was like barreling toward me. He’s walking finally, so that was kind of awesome. Merry Christmas!” 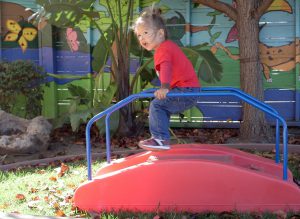 is now climbing and running and riding a scooter. Constance and Jubel don’t have any concerns about how he his developing and growing.

“As a mom, I think doctors need to listen to my perspective and check every avenue. Developmental screening is the first step to that. A lot of time parents are relieved to see that their kids are on point and in the typical range. But sometimes kids aren’t,” said Constance. “You don’t want to think there’s anything not going right with your kid, but at the same time, we already knew something wasn’t going right. It was nice to get validation about our instincts with Lars. Then we could see if this was something we could solve. And it was.”

Now that adult recreational marijuana use is legal under California’s Proposition 64, it’s important for pregnant and breastfeeding women and families with young children to take precautions to protect their babies and kids.

The first three years of life are the most rapid and critical period of brain development, making infants and toddlers particularly vulnerable to marijuana exposure. Prenatal exposure to THC, the chemical compound in cannabis, may have long-term damaging effects for children. Studies have linked marijuana use during pregnancy to decreased birth weight and later learning delays and behavior problems in children. There is no known safe amount of marijuana use for pregnant or breastfeeding mothers.

Safely storing marijuana out of children’s reach is another issue. States that have legalized recreational marijuana have found an increased number of unintentional child exposures to marijuana, particularly from children consuming edible products like brownies. Edible products have high amounts of marijuana, and the symptoms are more severe for a small child.

Marijuana-related visits to the Children’s Hospital of Colorado nearly doubled two years after legalization. Even with the anticipated packaging restrictions in California, children will still be at risk of ingesting appealing-looking edible products.

The California Department of Public Health, First 5 San Joaquin, and Children’s Hospital Colorado have some informative materials to share with families: