“When one person smokes, the whole building smokes.”

Richmond’s smoke-free multi-unit housing law went into effect in January and requires all apartments and condominiums to be non-smoking.  With 44% of Richmond’s population living in rental housing, the campaign is designed to inform these residents of their new protections and to increase awareness of the dangers of secondhand smoke on young children. 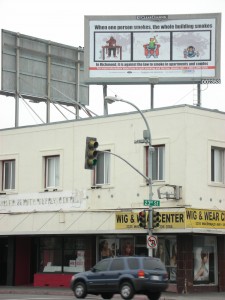 The ads are running over the next eight weeks inside and on tail exteriors of 33 AC Transit buses that traverse Richmond.  Ads have also been placed in bus shelters and billboards and will run through mid-October, and posters will be provided to Richmond child care centers.

The U.S. Surgeon General has concluded that there is no safe level of exposure to secondhand smoke.  Research has shown that secondhand smoke can drift between units, including through electrical outlets, floors, and vents.  Secondhand smoke can cause sudden infant death syndrome (SIDS) and health conditions in children such as middle ear infections, asthma, and respiratory infections.

Other cities in Contra Costa can protect residents from the dangers of secondhand smoke by adopting local laws that create smoke-free spaces.  The County’s Tobacco Prevention Project provides technical assistance to cities interested in developing projections: (925) 313-6216. Residents interested in joining the Tobacco Prevention Coalition should call (925) 313-6214.  And complaints about drifting smoke can be made to the County Health Department: (888) 877-4202.