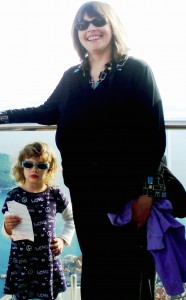 The following is a letter received by Nensi Brailo, a mother who found assistance and support for her family at the West County First 5 Center located in San Pablo.

I am writing to let you know what a big difference the West County First 5 Center made in my life.   I am a relatively old parent.  For years I worked to put myself through college as well as two graduate programs.  I was a career woman who ended up losing my job due to chronic illness.  I could have lost everything I have accomplished overnight had it not been for the support I have gotten from First 5.

Due to my chronic illness I was put on bed rest my second month of pregnancy, and even so my daughter was born almost seven weeks prematurely and spent a month in the Newborn Intensive Care Unit (NICU).  I was hospitalized repeatedly after my daughter was born and have undergone several surgeries.  I started getting discouraged and depression was starting to kick in.  An aggravating factor was the fact that I didn’t have any immediate family members in the area because all of them live overseas.  Fortunately, one of my home health nurses referred me to the Welcome Home Baby program.  In turn the Welcome Home Baby program referred me to First 5. The first class I ever took was a baby massage class with my infant daughter.

I was unable to take First 5 classes on a regular basis due to being in and out of hospital, but the flexibility of the First 5 program allowed me to take several parenting and children’s classes which I found extremely valuable.  Due to a job loss my income was depleted and the services offered by First 5 made a huge difference in my life.  Not only was I able to become a more competent parent, but my daughter also had a wonderful introduction to so many classes such as Creative Flow, TIGO, Science for Tots, dance classes with Ms. Renee, Zoophonics, La La Literacy, etc. As a result, my daughter is better prepared for kindergarten and I feel more confident knowing that she had a good start. Being an immigrant parent who immigrated to the United States at the age of 18, I haven’t had any experience with preschool, primary or secondary education in the United States.  First 5 made a huge difference and helped to educate both my daughter and me.

The other wonderful benefit of the First 5 center was meeting other immigrant mothers and children and becoming their friend. The mothers that I met at First 5 made a huge difference in my life as well. When I was too sick to care for my child several of them took my child for a play date and drove my daughter to First 5 classes.  If it wasn’t for the local First 5 Center, I could have ended up homeless and discouraged to the point of giving up.

I was lucky enough to have benefited from First 5’s programs and want other poor, disadvantaged, immigrant, disabled or sick parents and children to benefit from the life-changing services offered by First 5.