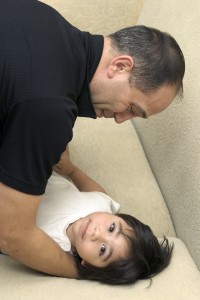 For nearly a decade, First 5 Contra Costa has funded Contra Costa ARC’s Care Parent Network, a program that provides training, educational support, peer mentoring, and one on one and group support for parents who have children with special needs. Care provides a monthly support group for dads, and last year, connected half a dozen fathers with peer mentors. Read about two Care dads, Bob and Tim, who share their perspectives about the program as well as their experience raising a child with special needs.

1) How did you become involved with the Care Parent Network?

Bob: I became involved with Care in 1998 shortly after my daughter, Tess, had an intraventricular hemorrhage (bleeding on the brain) in utero and was diagnosed at birth with hydrocephalus. My wife & I met Care’s Family Support Coordinator Louise Schneiders. Louise told me about Just for Fathers and I’ve been part of it ever since. It’s a bunch of dads getting together every month to catch up on our lives while sharing a pizza. It’s a great place!

Tim: I was referred by the Regional Center and my wife heard about both the mother’s and father’s group that meets once a month through Care. I decided to check out the dad’s group – pizza and beer didn’t sound so bad.

2) How has having a mentor and/or support group helped you and your family?

Bob: Being a part of the father’s group has made every part of this journey better for me. Like the other dads, I did not expect to be in the position of trying to manage the unmanageable, a condition that has no cure. I found that it helps knowing that you’re not alone and it’s valuable to learn from others about good ways to deal with situations. We live in a different world with a special vocabulary—it’s good to be around guys who speak that language. Sometimes it’s just nice to have a night out with other dads who understand what it’s like to be in this unique position.

Tim: Sometimes you must experience something in order to really understand it. When my daughter was born with a very rare chromosomal disorder, I had never felt more shocked and alone in my life. I absolutely needed to express what I have been going through with a group of people who understand. No one initially asked to join this group, but fate made it so. These guys are a diverse group of people that come together on common ground, and we hold each other up, and the devotion is as real as your best friend you’re lucky to have.  We all went on a relaxing trip to the Sierras with our families, came together in an epic colossal place; it was great for our families.

3) What is unique for dads raising a child with special needs?

Bob: As a dad and a husband, I was looking to solve the problem and somehow make things right for my family. I wanted answers and results. This was not something that I could talk about with my friends and neighbors – it was something they couldn’t understand and didn’t want to know about. I needed, and found in Just for Fathers, a place where I could talk with other dads in similar situations.  Over time, I not only learned a lot but also realized that I could help others.  Having an evening with the other dads, talking about jobs, sports and other things makes life seem more normal – I definitely needed that!

Tim: It is different for every dad in the group as we all go through a different psychological process based on the unique circumstances of our child’s diagnosis. I would say in general that men have a more difficult time expressing themselves and letting emotions show. Men can be more guarded not wanting to show tears because we believe it can be considered a weakness, when in reality a show of emotion is a show of strength and healing. It can be harder for men to open up. Having a child with special needs can complicate relationships and marriages, and men need to feel supported as equals when it comes to raising a child on all levels.

4) What else do you want people to know?

Bob: About 10 years ago I was at a national conference for families who have children with hydrocephalus, in a meeting with other fathers. I mentioned the Care father’s group to them and they told me how lucky I was to have this. None of them did. Over the period I’ve been involved, we’ve had fathers who’ve experienced the worst, the death of their special children. And every time, the dads have been there to support the father and each other.

Tim: It took me a while to come to terms with my situation in order to even be able to express the changes that were occurring in me. Now I can honestly say that I feel as though I have evolved as a human being… having had a unique child with special needs, I am more in touch with the core of why we are here on earth, to love each other unconditionally, to help each other. I have witnessed purity so sweet and special in my daughter that has been the greatest gift of all, so please don’t feel sorry for me, perhaps have empathy. Every milestone feels like a great accomplishment and miracle in my household and is the result of hours of hard work. I am so proud of my child’s progress.