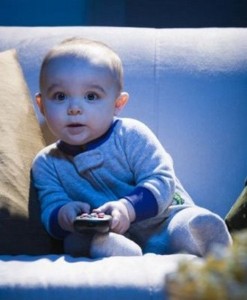 But unlike previous statements, the AAP is now discouraging the use of background television intended for adults when a young child is in the room. The AAP states, “This updated policy statement provides further evidence that media — both foreground and background — have potentially negative effects and no known positive effects for children younger than two years.”

Comments on social media sites, parenting blogs, and news articles demonstrated that most parents did not like this black and white approach, especially in today’s wired world.

I certainly understand the argument that moderation is key or that a few minutes of TV to prepare dinner is probably not the end of the world, but a new study released a few weeks ago by Common Sense Media tells a different story about how much screen times babies and toddlers are really consuming. The study found that half of children under age two in the United States watch an average of two hours of TV daily.

Even more startling from the study is the fact that nearly one-third of children under two have a television in their bedrooms, particularly low-income children. Children from families with annual incomes under $30,000 are three times more likely to have a TV in their bedroom compared to families with incomes above $75,000.

With the prevalence of smart phones, ipads, and countless early learning apps now available, I’m sure many parents will continue to object to the AAP’s screen time recommendations for children under two. But I don’t think anyone objects to the AAP’s main point: very young children learn best when interacting and playing with loving and engaged caregivers.

Some of the AAP’s additional recommendations are also worth noting and I don’t think they seem that unreasonable, particularly given the fact the first three years of a child’s life are the most critical time for brain development: