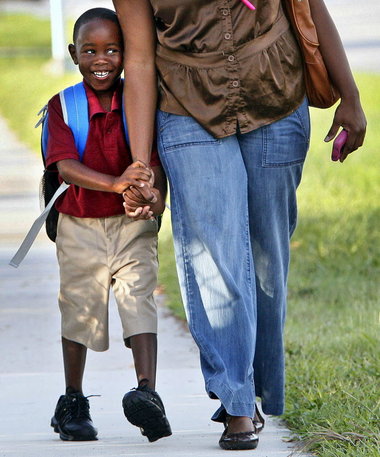 For years, California kindergarteners had to turn 5 before December 2 in order to register for kindergarten. The Kindergarten Readiness Act (SB 1381), passed in September 2010, changed the entry date to September 1 so all children would enter kindergarten at age 5. The new age requirement is being phased in over three years starting in 2012-13.

For children planning to enroll in kindergarten next year, they would have to turn 5 on or before November 1, 2012. The following year, the cut-off date will be October 1, and then September 1. SB 1381 also created a new program for young 5 year olds (those turning five between September 2 and December 2) called transitional kindergarten.

The legislation requires school districts to provide transitional kindergarten. Parents can voluntarily choose whether or not to enroll eligible children in the program. All programs are to be taught by credentialed teachers and would provide the type of experiences children need to be ready for school, such as small group activities and hands-on learning using resources that bridge pre-kindergarten and kindergarten standards. School districts have been in various stages of development for the program over the last several months. Now, just as parents are preparing to register children for kindergarten (or transitional kindergarten), things have gotten more complicated.

In January, Governor Brown released his proposed budget for next fiscal year, which eliminates all funding for transitional kindergarten. Some advocates anticipate this could affect over 40,000 children statewide next year alone.  Then, earlier this month, Governor Brown released a trailer bill to his legislation calling for transitional kindergarten to no longer be mandatory. It could still be offered, but it would be up to local districts to determine whether or not to offer it. The new cut-off dates remain, but the trailer legislation now says children who will be 4 years old in November could be admitted to kindergarten if parents request it. What now?

We called various local school districts to enquire whether or not they were moving forward with transitional kindergarten. Some were (Antioch), some weren’t (San Ramon), some were putting it on hold until more is known about the budget (Pittsburg), and some couldn’t provide an answer at all (I won’t mention names here).

For parents of children with fall birthdays, this is all very confusing. And to be fair, for the districts trying to implement this new legislation with already stretched dollars and the uncertainty of the state budget, this is all incredibly challenging.

My advice to parents would be to call your school district and find out what options you have. You may have to call back a few times and check the district’s website for updates. If your child is currently in a preschool program, you may want to talk to the program’s director to see if there’s space available next year just in case you decide to keep your child in preschool.

In the meantime, even if you don’t know whether or not your child is eligible for kindergarten or transitional kindergarten, you can certainly help him or her get ready. Schedule trips to the library, read aloud daily with your child, set up some play dates with other kids, make sure your child gets regular health and dental check-ups, and review the following list. These are the most important skills that kindergarten teachers say children need to start school prepared.

APPROACHES TO LEARNING – Your child: