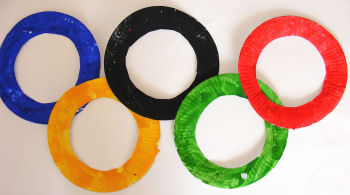 It’s just paper plates – even I could do this craft!

My five-and-a-half-year old kindergarten-bound son is going C-R-A-Z-Y for the Olympics.

Like any parent of a child this age, I first thought it was because watching the Olympic games meant he could stay up past his usual bedtime. But when I questioned him he pleaded, “No Mom, I’m really interested in this”. And when he asked to watch women’s cycling over Sponge Bob Square Pants on Saturday morning, I knew something about the Olympics had really taken hold.

Now four days in (we watch for an hour from 8:00 to 9:00 p.m.) I’ve discovered that the Olympics are really providing everyday learning opportunities for my son. He’s been:

Practicing numbers: When watching beach volleyball, he loved following the score and calling out the numbers. It was also a good math lesson when I explained the teams had to win the set by a two-point advantage.

Exploring geography: By the second night, we got the globe out and set it in the living room. So now when he’s curious about a country, we look it up. This is  increasing his understanding of continents, time zones, and other cultures.  Up next he wants to cut out construction paper to make flags.

Modeling teamwork and sportsmanship: This probably is the best lesson so far. He’s learning about hard work, working together as a team, and that not everyone will go home with a gold medal. But win or lose, he’s seeing the importance of being gracious and respectful of your opponent.

Engaging his Imagination: To date, he’s won medals (which he created) in pillow throwing, standing on one foot, and couch trampoline – although I did strip him of his medal for that last category after landing on his little sister.

Getting outside to play: Last night I timed him as he raced around the back yard, each time trying to best his world record. Today he’s requested that we play Olympics – for real. So he’s planned an actual soccer match for the morning.

And the first week is not even over!