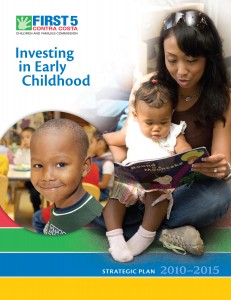 Our current five-year plan, which ends this June, was developed during the Great Recession and in the midst of severe budget cuts for California’s safety net programs. We decided during that challenging time to keep our funding levels as high as possible, and we did, investing more than $71 million.

The picture now, while not totally rosy, is certainly brighter than it was five years ago. The economy is recovering and some programs decimated by budget cuts have been partially restored. Last year’s state budget process was the easiest in recent memory. Perhaps most exciting is the traction early childhood development funding has currently, from federal and state preschool initiatives to those addressing the “word gap” for low-income toddlers. First 5 has always been on the forefront of early childhood issues. It seems the rest of the nation is catching up, and opportunities abound.

A few realities haven’t changed though. Nearly one in four children in California lives in poverty. Raising a child, particularly in the high-cost Bay Area, remains a struggle for many families. And as expected, Prop. 10 revenues, the tobacco tax that supports First 5’s around the state, continue to decline about 3% every year. 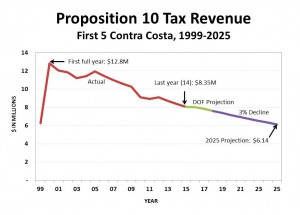 The good news is that, despite this decline, we managed to maintain funding for our programs over the last five years by using our fund balance and securing additional revenue. Even better news is that by acquiring $11.9 million in additional grant funding, we used less of the fund balance than originally planned ($19.2 million instead of $30 million).

These figures are based on what we know now, and could change over the next five years. With fifteen years of experience, we’ve learned that things can change very quickly.

At our October Commission meeting, Commissioners voted to adopt a $13 million spending plan for next fiscal year, the first year of our 2015-2020 Strategic Plan. We have decided to make 2015-2016 a bridge year between plans, with minimal reductions. This will allow us extra time to incorporate possible state and federal grants and other funding opportunities into our planning process.

This spring, we will hold a retreat with the Commission to begin forming the 2015-2020 Strategic Plan, a process we hope to complete by fall 2015.

The planning process will allow us to take full stock of where we are and how we’ll build on our achievements over the last 15 years. I’ll provide regular updates as the new Strategic Plan takes shape.