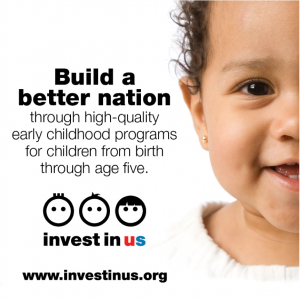 Today at the White House, President Obama announced $1 billion in public-private investments focused on young children. “Early education is one of the best investments we can make,” the President said during the day-long summit on early childhood funding.

This is all great news for the nation’s youngest children, where only three in ten 4-year-olds currently attend quality preschool programs.

California applied for a Preschool Expansion Grant and was not among the 18 states selected. First 5 Contra Costa was included in the grant proposal. If awarded, funds would have expanded quality early learning opportunities for low-income children in our community.

Despite not being selected for what could have been a $35 million grant – and it is very disappointing – I am encouraged by the action that took place today. The President and a growing number of philanthropists, economists, corporations, and elected officials have officially challenged America to invest in our future and focus resources on children’s earliest years.

In California, it should inspire us to continue the many great things we have in our state to support young children and their families. Last year, First 5s invested over half a billion dollars in local programs for children, parents, and educators. The California legislature made a priority of increasing funding for early childhood programs last year and the Preschool for All Act of 2015 has already been introduced in this year’s session. California is home to corporations and foundations with significant resources and understanding of the value of investing in early childhood.

Investing in early childhood is not a red state or blue state issue. It’s an issue that affects the future of everyone in America. And now the case for these critical investments, as a way to level the playing field and build our future workforce, is being made on the national stage. As the President said, “It’s the essential promise of America that where you start should not and will not determine where you will go.”

From all sectors, all branches of government, and all communities across California, let’s keep our eyes on the future and do the necessary work now to build the system that ensures all children arrive at kindergarten healthy and fully ready to learn.